The city of Belcastro (Kallipoleos during the Byzantine period and Genitocastro in the Norman-Swabian age) was one of the suffragan dioceses of Santa Severina.

Its cathedral is dedicated to the Archangel St. Michael and according to some scholars it was built in the 11th century and embellished thanks to the intervention of a local noble man, Angiolo Carbone.

The city remained a flourishing place at least until almost the entire first half of the 16th century; the subsequent decline also affected the church building. The center of the village, in fact, was totally abandoned, also due to the inhospitability of the place where some marshes were present.

The cathedral itself, therefore, first in the center of the village, since the early 1600s found itself practically outside the town and in a state of neglect. 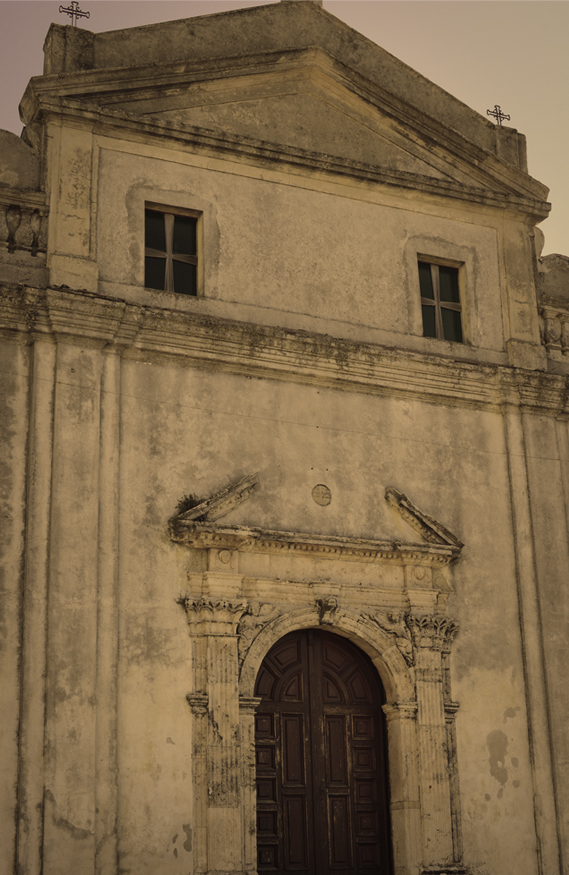 In the first half of the 17th century the bishop Girolamo Ricciulli and his two successors, Antonio Ricciulli and Filippo Crino, carried out some repairs and restorations (including the large wooden choir that can still be admired today), while the bishop Bartolomeo Giptio, in 1632, purchased some sacred furnishings.

However, in the following years, the building continued in its state of decay, also because the prelates did not usually reside there. Heavily shaken by the earthquakes of 1638 and 1689, some interventions were attempted at the end of the seventeenth century but were still insufficient to restore a dignified building.

Unfortunately, in the following century, the neglect of local bishops and lords and the earthquake of 1783 contributed to further worsening the situation.

Currently the building, with a Romanesque structure, has a Latin cross shape. The façade exhibits three tuff stone portals with 17th century decorations and sculptures. To the right of the building is the high square-shaped bell tower. The interior has a basilica shape, with three naves and three apses. Until the first half of the 1900s, there were three Baroque altars on each nave

To the side of the central altar is the “seat of the elect”, built in 1634. As a result of a restoration carried out in the 90s, a “truss” dating back to 1627 emerged and on the naves 2 frescoes, one from the Baroque period and one from the Renaissance period. Finally, in the course of recent renovations, it emerged that there are rooms below the floor, which are still unexplored.

The cathedral is dedicated to the Archangel St. Michael and was embellished thanks to the intervention of a local noble man, Angiolo Carbone.
Go to Treasures
Back to map
Scroll to top